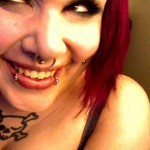 active 2 months, 2 weeks ago
“Every body is a Book of Blood; wherever we’re opened, we’re red.” View